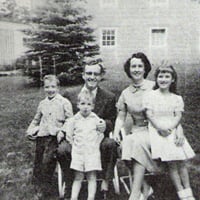 The birth of GBBC started many years ago in the early 1960’s. In 1961, Pastor Charles Leiphart, his wife Doris and their children, arrived in the Gettysburg area. Pastor Leiphart, from Renova, Pennsylvania, came to Gettysburg with the expressed burden of starting a local, independent Bible Church. He stated, “ I felt the call of God to establish an independent, fundamental, gospel witness in Gettysburg.” This early, small church planter did exactly that; and in a short period of time he was looking for a place suitable for rent so Bible studies and a Sunday School could be established. 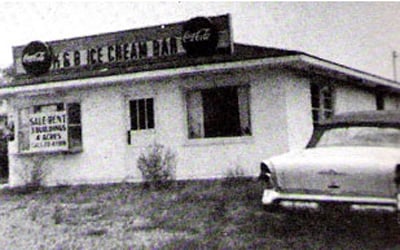 He had a difficult time finding a place suitable for this purpose, and after much prayer and God’s ultimate leading, two buildings were acquired for rental in the Gettysburg area. These two building’s included an old house and Ice Cream shop. The Ice Cream shop and house were both cleaned and prepared for the establishing of in-house Sunday school classes for children and Bible Studies for adults. 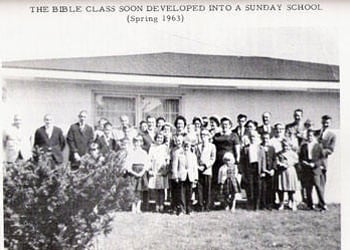 Pastor Leiphart worked in sales as a bi-vocational pastor and handed out many tracts, and always invited those he met to his newly formed Bible studies. During this time God greatly blessed and soon a small nucleus of believers was formed. The small seeds of Gettysburg Bible Church were being planted and growing.

In 1964, a committee was chosen from this small group of believers to write and format a church constitution. Many long hours were spent on this task, and eventually this was completed, which led to a charter.

In December of 1965, this nucleus of believers was granted a charter from the Adams County Court House. The charter made the ministry a non-profit religious organization, and was named Gettysburg Bible Church. There were thirty-six charter members during this milestone of GBBC’s early ministry. The purpose of this newly formed corporation was expressed in a clipping in the December 4, 1965 edition of the Gettysburg Times Newspaper concerning this charter. It expressed eloquently what GBBC still stands for these many decades later. It stated there, “ The edification of Christians through the teaching of God’s word; the salvation of souls; the worldwide proclamation of God’s saving grace expressed in the shed blood and finished work of the Lord Jesus Christ on Cavalry; the Promotion of godly worship; the defense of the “faith, which was once delivered unto the Saints’ until he comes.”

Pastor Leiphart would not be full time, and came to realize that Gettysburg Bible Church needed a full time Pastor for this growing ministry. In November 1966 Pastor Leiphart and his family left this ministry, where God had greatly used him as a church planter, to help another work in the Renova, Pennsylvania area. 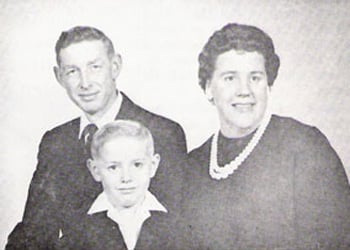 During this time of transition God led another motivated pastor. Soon the late Pastor Robert Kelly and wife Ruth and children arrived in Gettysburg. The Lord led Pastor Kelly to become the full time pastor of this group of believers. The ministry and attendance continued to grow. The need was felt by much of the congregation to seek a property and a facility that could be bought and used as a church building. Again God providentially led and a property soon became a possibility.

There was an estate for sale with property from the late Earl Guise. This included a 40 x 80 block building, a 3-bedroom block building, and property for $25,000. The church asked Earl Guise for a thirty-day hold on the property so the people could make a decision. A Sunday school picnic was held on the grounds and everyone felt the green light to purchase the property and make the Guise Estate the new home for Gettysburg Bible Church. 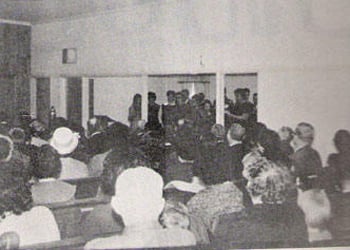 On October 16, 1966 the title was transferred and soon GBC had its own place to worship.

The old farm/implement Oliver tractor dealership became transformed rather quickly. These talented and dedicated workers spent countless hours on the property; cleaning, scrubbing floors, laying two inches of new concrete, erecting partitions for Sunday school rooms and classes, and blocking off the old garage doors. A complete set of pews was purchased from the Mount Zion Lutheran Church in York, PA. The first service was held on December 2, 1966 in the present building, which is now GBBC’s current location. In an early writing found from the congregation at this time, they expressed their thoughts on this new building. The writing stated, “The building was rough”, “The ceilings were dark and unlighted, the walls were not painted, but we worshipped here with praise in our hearts to our wonderful God.”

Early view of the church property in the 1930's 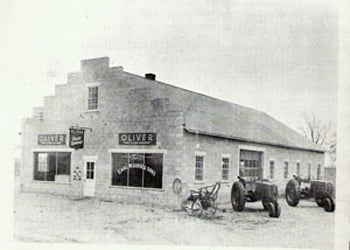 During the years the late Pastor Kelly and his family ministered at GBC much work was done on the property. This included work parties of dedicated members who painted, landscaped, rewired, insulated, and cleaned.

During this time Gettysburg Bible Church had a strong impact on the Adams County area and the world at large. They greatly emphasized missions, and had numerous evangelistic ministries that were greatly attended and kept active. These included an active bus ministry, ladies missionary circles, youth group, and in-house printing ministry of missionary letters called the Missionary Letter Service. Other ministries and outreaches included a courtesy committee, live nativity scenes, tourist ministry, soul winning, and more.

In 1970 Pastor Kelly and his family felt led to transition into a full time work in the printing ministry of missionary letters and mailings, of which they maintained for many years. Before Pastor Kelly and his wife Ruth passed away he started two other churches, a Christian school, and worked in a camp ministry. Before his death in 2005 he would often visit the ministry at GBBC along with his wife. He would often remark to the Pastor how pleased he was to see the vision and outreaches of this present ministry still going strong for the Lord. 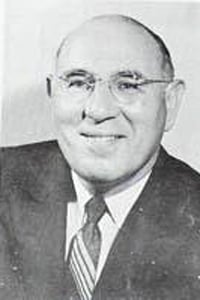 During this new transition in the ministry of GBC, God led another man and his wife to pastor the work. He was the late Howard Wheatley. He came to the Gettysburg area after Pastor Kelly’s resignation and continued on as pastor. A familiar figure, Pastor Wheatley had preached conferences at the church. He was known to be a scholarly man and wrote numerous tracts, pamphlets, and books on various topics of Christian interest. Some of these books may still be found in old Christian book collections. He was a pastor at GBC for four years before he passed away, but his impact on the church ministry was ingrained. 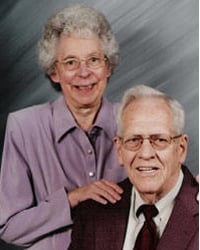 The ministry at GBC now experienced another change of leadership; this time into a full time pastor for a lengthy period. Pastor Richard Mitchel, and wife Lois and family, moved to the Gettysburg area from the York area. Formerly from a ministry in York called Teen Encounter, and numerous other evangelistic ministries, Pastor Richard came to the Gettysburg Bible Church family in 1975.

During his many years of ministry at Gettysburg Bible Church many new ministries were started and changes were made as this church continued to grow and souls were saved. One ministry that was started during this time was an in-house Christian academy called the Gettysburg Bible Christian School. This was transitioned into many families' home schooling. Other ministries during this time period included: jail ministry, nursing home ministry, visitation, tract ministry, and many others. God blessed during these years, and growth was seen in many areas. Some major changes during this time was the installation of Pastor Dave Mitchel becoming an associate in the early 1980’s. Also, Pastor David Mitchel traveled to Fellowship Tract League and instilled in his heart, and Pastor Richard’s heart, to become supporters and purchasers of rolls of paper and mailing bags to send tracts to numerous world wide locations.

During these years the congregation voted on changing the name of the Church from Gettysburg Bible, to Gettysburg Bible Baptist Church. This was to more closely align the church with the Baptist beliefs and firm fundamental doctrines contained in God’s Word.

In 1999 Pastor Richard Mitchel felt God’s leading into another area of ministry. He felt God’s leading into becoming a full time traveling representative for the Fellowship Tract League. This included presenting the ministry of the Fellowship Tract League to numerous churches across the country. When health permits, they still continue this vital ministry today. 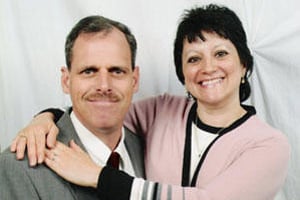 After Pastor Mitchel’s resignation his capable son, Pastor David Mitchel, and wife Patty, felt the call to fill the vacancy left by Pastor Mitchel’s resignation. In 1999 Pastor David was ordained into the ministry with numerous pastors, missionaries and evangelists being on his ordination council. He then was voted in, unanimously, as pastor at GBBC.

Pastor Dave, as many affectionately call him, was fully prepared and ready for this task at hand. He had been the Associate pastor for 18 years with Pastor Emeritus Richard Mitchel.

Many have said that Pastor Dave’s keen Bible memorization, knowledge, and well-studied sermons leave the listener knowing that they heard a message from the Bible. Many times, people will see Pastor Dave and wife Patty working at the church, and putting in countless behind the scenes hours to continue this ministry.

The ministry of GBBC continues under very capable leadership at this time. There is a continuing burden at GBBC to keep many of the same key elements of the foundational components of this ministry with a new vision, and new direction, as we embrace the 21st century. 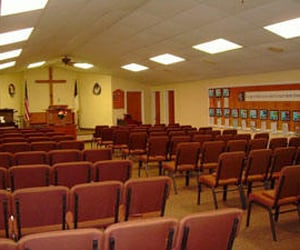 This new vision includes a large emphasis on worldwide missions and evangelization of the community. This includes GBBC being responsible for over 30 million tracts being sponsored by this ministry in the purchasing of supplies, paper, and tracts being mailed as M-bags for the Fellowship Tract League. These tracts and M-bags have been sent to numerous countries all over the world. Another key element is the missions programs that are currently being supported. Also, GBBC continues to take a strong stand on the issues and doctrines rapidly becoming neglected in society. These include: the Bible, standards of Christian living, salvation, teaching, and exhortation. Included is a strong emphasis on updating and remodeling the church building and property. 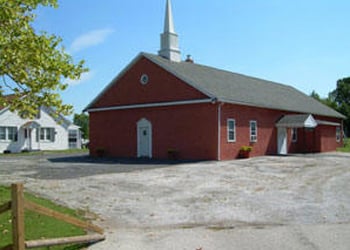 As the world around us becomes more confused and unsettled, GBBC, with its current pastor and dedicated family of believers, seeks to continue on for Christ. This ministry still seeks the lost and hopeless in the world and wants to shine the light of Christ as God blesses and leads. The desire is for Gettysburg Bible Baptist Church to continue to be a work, “ For the Word of God and the Testimony of Jesus Christ ”